Why are night vision green? 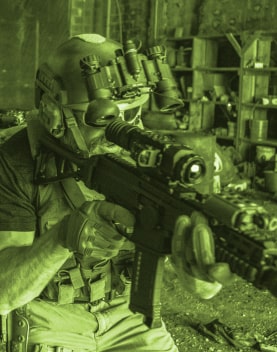 Night vision goggles are an essential part of everyday life for hunters, military, and police officers. Of course, many people have seen in war movies or action movies how the image in night vision devices looks like. For some reason, it is green. Below we will try to understand what the reason is.

The working principle of night vision devices (NV) is based on the conversion of infrared (IR) radiation using an electro-optical converter (EOC) into the visible light and on the amplification of low levels of brightness, which are displayed on the observed object by the glow of the night sky, stars, and the moon in the visible and near-infrared spectrum. Night vision devices are most commonly used for observation, sighting, and driving in military and civilian applications. Also, night vision devices are widely used in the border, customs, rescue services, industrial, technological control, mining, scientific research, observing the behavior of animals, night orientation in the area, astronomical observations, and so on. NVs have high reliability, low weight, dimensions, ease of use and maintenance, high performance, long hours of continuous operation. Naturally, these characteristics led to the wide application of NV equipment in security and protection systems.

How does a night vision device work?

Electro-optical transducer. The transducer is where all the most important things happen. It is a sealed tube with air evacuated out of it. A thin layer of semiconductor is placed on the front wall of the tube, and a luminescent substance (luminophore) is placed on the back wall. A voltage is applied to the transducer tube so that the front wall is negatively charged (cathode) and the back fence is positively charged (anode). Since there is an excess of negatively charged electrons in the cathode, they want to get out of it and attract themselves to the positively charged anode. Still, there is not enough voltage to tear them out of the semiconductor. However, it is worth at least one photon from a faintly visible object hits the photocathode, and it immediately knocks some electron out of it into the vacuum, which gains more speed and hits the phosphor. The phosphor loses energy by colliding with other electrons, and the phosphor electrons spend the resulting energy on the light. This is a type of luminescence and is predictably called cathode-luminescence.

The more light hits the photocathode, the more electrons are knocked out, and the brighter the corresponding point of the phosphor glows. It does not matter to the photocathode what photon came to it: visible, infrared, or ultraviolet, so the color information is lost, and the image on the luminescent screen will be black and green because the most sensitive phosphor glows green.

Why is NV green?

The characteristic green hue is present in the image for a reason. First, device manufacturers experimented with several different colors. They found that the different hues that make up a monochrome night vision image are most accurately perceived and distinguishable when they are green. Second reason: The human eye can distinguish more shades of green than any other color, making it easier to see objects in an image. The third reason is that the human eye gets less tired of green than white. It is worth noting that there are also NVs with white color, but green is still more common. Why? Because the flow of electrons is not so intense. To make the phosphor glow green, light needs much less energy than white. In addition, this is the main thing for an NVD. The fluorescent screens in night vision devices are deliberately coated with a compound glowing cool green. It is not a matter of preference or tradition, but the human eye can distinguish the most significant number of shades of green. If you are in complete darkness from the green glow of the eyes, tired less than white, and quickly adjust to the dark.

The main competitive advantage of a night vision device compared to the eye is seeing infrared radiation. Put the palm of your hand to your forehead at a tiny distance. Your forehead will feel the heat caused by the thermal radiation of the palm. All of us emit light only in the invisible infrared region of the spectrum, so the device allows you to see a warm glowing person or animal from afar.