White or green. What is better 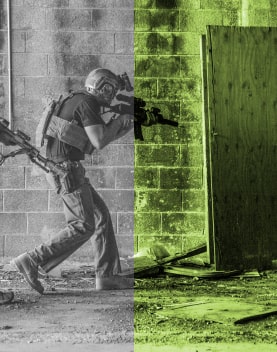 Night vision devices are often used in various operational tasks, including aviation. For example, they are used to locate missing persons in low light conditions or assist aircraft and helicopter pilots when visibility is limited, as well as for night navigation and guarding objects in the dark. Night vision technology is also used for hunting and observing animals in the dark. The display on the optical device allows the user to make decisions based on the digital information displayed. Night vision technology is predominantly used in glasses and headsets. In optical devices, augmented reality is realized by superimposing digital information on the user’s field of vision. Augmented reality involves overlaying images on the lenses of night vision goggles to display critical information such as route, speed, orientation, location, and distance to a target. This digital data plays an essential role in decision-making.

A night vision image intensifier is an optical device that absorbs and amplifies incident light. Light is fed to the photocathode lens, and then the light flux is amplified and transmitted through a vacuum tube to a microchannel plate, which allows the display to show the same picture as to when the light hits the photocathode. The image intensifier increases the brightness of the incident light, making it easier to see the image. Even on the darkest night, there is, for example, infrared radiation that people cannot see. Night vision goggles with image enhancement technology use the entire available spectrum. This is crucial to getting the best image possible. Night vision goggles are used in various applications, such as security and surveillance, coast guard; hunting; and sports.

Types of NV color – what is better for you?

During the day, due to the infrared spectrum of sunlight, a human can distinguish colors, while at night, everything is reduced to a monochrome image. The green color in devices with EOC is explained by the glow of phosphor when electrons hit it, black and white in digital night vision devices – using the corresponding display. There are phosphor application technologies for creating black and white EOCs. According to hunters’ reviews, the usability of one and the other type of display is comparable. The green glow makes your eyes less tired in the dark, which is more comfortable for long sightings. And with black and white, so it is more effective when searching for a target. The human eye can distinguish between approximately 400 shades of green, so a person can better recognize the surrounding terrain. A black and white image increases the contrast between the target and the background. Therefore, it is up to the hunter to decide which image is right for him. The glow color does not affect the recognition range. Still, the corresponding colors complement the image in winter and summertime: In winter, all objects look better on the snow background – their image is more contrast than on a summer or spring-autumn ground. That is why night sights with EOC and “digital” sights increase one and a half times vision range in winter. In addition, in winter, the transparency of the atmosphere improves – due to lower temperatures, dust particles freeze and fall to the ground. This also leads to an increased range performance. The temperature difference between the object and the background increases in thermal imaging sights because the object’s temperature does not change in winter, while the background temperature drops dramatically. This leads to an increase in the range of vision.

Nighttime hunting can be complicated by snowfall, blizzard, or fog. From this point of view, it is better to use thermal imaging sights in winter. When you buy a night vision device for winter night hunting, it is necessary to determine whether the outer optical surfaces of the objective lens and eyepiece have protective coatings to protect against fogging. Instead of such coatings, electric heating of these surfaces can be used. To prevent fogging of internal optical surfaces, the internal cavity of the riflescope is filled with dry nitrogen. The good thing about nighttime winter hunting is that many animals (wild boar in particular) lose their vigilance in these conditions and therefore are more vulnerable. Practice shows that a thermal sight is the best for night hunting in snow-covered woods, especially under adverse vision conditions. When choosing a company, it is not essential to see the minor details – to make an accurate shot. It is enough to see only the outlines of the beast. The main criterion for choosing a sight is image sharpness and temperature sensitivity. The frame rate should be at least 50 Hz. The sight must have a sufficiently high mechanical strength and shock resistance (allowing installation and operation of the sight on weapons of different calibers), tightness, must work at minus temperatures.

In the opinion of professional hunters, an EOC or display screen that forms a black and white image is better suited for winter hunting conditions. At night, people do not distinguish colors and perceive only shades of gray. Therefore, black and white images are optimal from the point of view of the physiology of visual perception. Such an image is more natural for human night vision, and the eyes do not get tired.