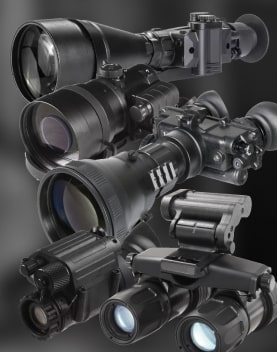 A night vision device (NVD) is designed to observe objects at night or dusk when the brightness is not bright enough for the human eye. If there is a need to increase visibility in the dark, to make an object so precise that it can be observed and even studied, a night vision device comes to the rescue. Initially, it was developed for defense purposes, but in recent years NVD, as it is called, has been used for many other needs: sports, hunting, and so on. An NV unit is a device whose operation is based on converting indistinguishable infrared radiation into that visible to the human eye. In addition, the device amplifies the low level of brightness on the observed object, which is created by the glow of the night sky, the moon, or stars. It is used by border patrols, customs services, rescue services, Special Forces, etc. Night vision devices can also be used in closed rooms, basements of buildings if it is impossible or impractical to use open bright light sources (lanterns, floodlights). There are two main ways of classifying night vision devices: by function and generation of the electron-optical converter (EOC) installed in a night vision device. Classification of night vision devices by function: night vision monocular, night vision binoculars, night vision goggles, and night sights.

In this device, there is binocular vision, which allows the user a more authentic and accurate assessment of the seen image. Binoculars are night vision devices with two monoculars connected in a standard design. They can repeatedly magnify the picture, which at the same time remains visible. Binoculars are used for both civilian and military purposes to observe distant objects.

This device is similar in appearance to a spyglass, and you can look through such a night vision device with only one eye. However, this affordable option has a small weight and size, its design is simple and reliable, and the price is low. The monocular can be attached to a unique headband or helmet-helmet. The device provides night vision without illumination. It is used in tourism, hunting to protect areas, and repair work.

The glasses use one EOC, but the visual signal is distributed separately to each eye, thanks to the optics. Such a set, consisting of a lens and two eyepieces, is attached to the helmet or head with straps, and the person’s hands remain free. Such night vision goggles for drivers and hunters are becoming increasingly popular and in demand. Because the night vision goggles have no zoom function, distance to objects is estimated quite adequately. Use such a device when driving vehicles, night shooting.

There are two types of sights: a digital night vision device and an electro-optical converter sight. The design of such a device is similar to monoculars, but the sight can be screwed on the weapon, and the target through it can be viewed in all the most minor details. Such a sight is often used for civilian purposes. For example, hunters use them to shoot at night at moving targets. In addition, the military night vision device is used today in many armies worldwide.