Colored NV – the myth of reality 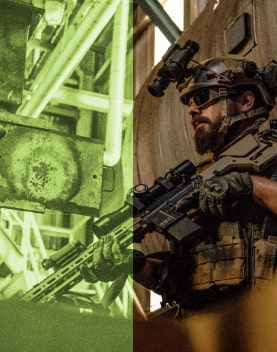 Night vision devices are the brainchild of the war years. The first such devices appeared during World War II. They were heavy, not too “long-range” (providing visibility of no more than 200 meters), and ensured the movement of tank columns at night. In 1944, German engineers developed the prototype of such a sniper’s night vision device as we are used to seeing. However, at a relatively short range of about 100 meters, the device, along with all the additional equipment and batteries, weighed almost 35 kilograms. Nowadays, a night vision device is not a remote but an everyday thing. You do not have to be a military man to hold and use it. However, if you are into hunting, you should know about it.

The two main varieties of modern night vision devices are monocular and binocular: the latter are sometimes called binoculars. As the name implies, they differ in the number of eyepieces in the device. Which one is better to choose – depends on your goals and experience. Monoculars are much more accessible, cheaper, and more compact. Still, it is easier to determine the distance to the object with a binocular NV unit, and it has a noticeably higher viewing range.

What is Night Vision technology?

Night vision devices – high-tech devices for target detection, hunting, and nighttime surveillance. A digital N.V. allows you to observe the target in conditions of almost complete darkness at distances up to several hundred meters, significantly increasing the effectiveness of hunting from a ranger or a shelter at night and during the already thickened twilight. The operating principle of night vision devices is based on an electro-optical converter, which forms the usual, visible image generally perceived by the human eye by converting from other radiation spectra that are not perceived by the naked eye. The design of modern digital night vision devices based on the third generation EOC (electro-optical converter) allows the full use of N.V. in complete darkness, only in starlight, which gives an undeniable advantage when shooting at night.

The future of a Night vision development

Not so long ago, the U.S. Army published a review of the new Night Vision Goggles. The latest development combines computer vision, white phosphor tubes, and binocular design. The glasses can be used during the day in fog and smoke, and the image through them is apparent, bright, and close to the real thing. Traditional night vision devices are monocular with a green phosphor tube. The image sharpness of these devices is such that the observer has to guess a lot on his own, which is exceptionally undesirable in combat and extreme conditions. That’s why new night vision devices were developed at the request of the military, which improved the image sharpness and introduced binocular vision into the device, which enables a much better orientation in the situation and better assessment of the distance to the target. For example, using a white phosphor tube brings the colors in the image closer to the real thing, while the computer system traces the outline of the observation objects. Together, they create a picture in which everything, or almost everything, is clear. The new development is lighter than traditional night vision devices but heavier than conventional binoculars, so it is attached to the soldier’s helmet and can be folded back.

The U.S. military wants to create night vision goggles in a sunglasses format in the future. The tender for this development has already been announced, and companies are being searched for developers. The next generation of night vision technology will be developed in the future. Much attention will be paid to integrating more data, importing and exporting it while simultaneously working with optical or optoelectronic imaging.

The promising future for the new generations of NVRs lies in more extensive fields of view, smaller instrument sizes, and the combination of NVRs and thermal imagers. Thanks to new light-sensitive coatings made of nanoparticles, experiments in enhancement and reduction are being successfully conducted. But we can be sure that some exciting prototypes from private manufacturers or government agencies are kept secret and are gradually being tested. As soon as such developments are ready, they will be presented to the public. Science develops, and every year there are more and more new developments and new opportunities to simplify the existence of people in all spheres of life.