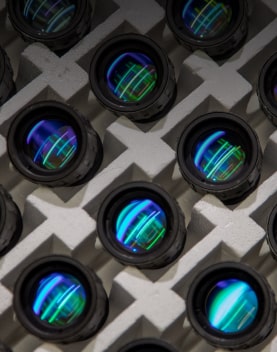 You are unlikely to argue with the assertion that the priority task of humanity is constant development. This is not even a priority task. It is an absolute requirement of survival, thanks to which we get the opportunity to stay at the top of the food chain.

Depending on your views, Nature or God has not endowed man with practically anything that would allow him to withstand the cruel reality of the wild world and the severe challenges of evolution. We have nothing that would enable us to fight with other animals for a place in the sun. We have no sharp claws, no fearsome fangs, no powerful muscles. Our hearing is weak, our body is defenseless, and our eyes cannot distinguish the enemy, at times, even at dusk. The only thing that left us a chance was the brain, thanks to which we are the true kings of nature.

If we start talking about the weakness of our eyesight, then this example will be, for sure, the most significant. In comparison with other animals, the human vision system, even in comparison with the most ordinary domestic cat, is so imperfect that it can be neglected. Even during the day, we will not distinguish some objects that other representatives of the animal world can easily see in all details. All the more significant is the achievement of scientists and engineers who were able to improve the evolutionary flaw of man and repeat the mechanism created by evolution.

Thanks to this, we were able to see at night. This skill has made us the ultimate predator.

To understand the full scale of this achievement, we would like to point out that we have developed several night vision technologies. But, today, we will focus on only one technology, which is the most popular in popular culture and the most famous among those who are not interested in the topic. There is hardly anyone who has never seen the characteristic green glow in films or video games. This is how the operator of the night vision device sees the observation location.

This mechanism for the manifestation of hidden objects in the dark is based on the amplification of weak light. It repeats the ability of cats. Only high-tech analogs are used instead of cones and sticks of eyes. But, the image perception algorithm remains identical. The device accumulates weak light, which can even be the moon, and amplifies it to such an extent that the observation area becomes visible to the observer.

At the same time, there are not so many conditions that will make the device useless. However, there is a decent answer for such shortcomings unless you try to use it in a deep cave or during a catastrophic blizzard. For example, small IR emitters create an infrared glow that is invisible to most people but gives enough boost for the device.

Such a unique technology could not become the basis for creating many devices with their specifics. For example, NV binoculars, it is difficult to imagine a modern soldier and hunter. A two-tube device is a unique tool, indispensable for long-term stationary terrain observation. Its design allows long-term observation without straining the eyes and giving sufficient depth and perspective to the image. But, they also have a drawback: they are substantial and require both hands to use them.

Night vision goggles solve the same problem as binoculars but at the same time allow your hands to be free. That is why the soldiers of unique units so love them, and that is why our soldiers can proudly recite: “We owe the night.”

At the same time, scientists presented us with an intermediate version – NV monocular. A device that fits in a pocket while having the full functionality of a full-fledged, large device. Yes, perspective and depth are not as good as binoculars, but size and ergonomics can be factors.

At the same time, do not forget about another essential type of device – night vision scopes. They are the reason why we wrote this text. This is still the same monocular, but with one significant difference – it can withstand the most powerful recoil of the weapon.

It is small, can be used as a monocular, and has a unique reticle. Being inherently the same high-tech and fragile device, the scope is reinforced so much that you can safely go hunting with it. In general, if you cannot imagine your life without raids into the forest, then this option is for you.

But, here, a completely different problem arises: how to choose the best night vision scopes? The market is so saturated with various offers that even if you are well versed in the topic, you will still get confused. And it is significantly correlated with beginners. And if, in addition, we consider that the technology is expensive due to the complexity of production, then the rates increase significantly. Therefore, today we will make your life a little easier by offering you our tier of the best night vision scopes.

Night vision technology has come a long way of development, which is usually defined by a generation, of which there are already four. Valid, the fourth generation is just beginning to conquer the market and, often, its cost is very high. At the same time, the first generation is considered by some to be irrelevant and too backward for modern challenges. Trifecta demonstrates a misconception by offering this inexpensive, high-quality product.

In many ways, Trifecta 3.0×50 CORE breaks down the stereotypes of first-generation appliances. It has a high resolution, has no aquarium effect, and has glass-replaced ceramic in tubes. The Mil-dot ballistic reticle and 50-60 lp / mm resolution turn the device into an ergonomic and practical item that is indispensable for a hunter, especially if you are hunting small animals.

Among the shortcomings, it can be noted, perhaps, the battery, which holds a charge for no more than ten hours and 300 yards of object detection range, which, however, is not so bad for a device in this price range. Yes, we forgot to mention that the cost of this scope is another decisive advantage.

One of our favorites from the leading American night vision manufacturer AGM. Let us immediately voice its shortcomings: it is heavy. That’s all.

On the other hand, its high weight is due to its packaging. The first thing you will appreciate will be the large size lens and excellent tube quality. A 3-pound weight won’t seem like a problem anymore with this data. In addition, this device is equipped with a white phosphor screen. AGM does not choose a side in the eternal dispute between fans of green and white NV image. Therefore, both types of Wolverine Pro-6 models are on the market.

A full-fledged 3rd generation of the device will give you all the advantages of modern technologies. The reliability of the design and engineering solutions will provide high protection against weapon recoil. And don’t forget about the great-styled reticle that has long been characteristic of AGM Global Visio products.

The Bering Optics D-790 is a prime example of how high weight does not mean a scope is terrible. This is an excellent Gen 3+ device. One of its features is the MOA / MIL weapon reticle system with several thousand points.

White phosphor and a decent range of 600-900 yards give the maximum opportunity for comfortable hunting. But, and that’s not all. The D-790 is entirely waterproof and has an excellent battery that provides a long run time. Combined with a reasonable price point, this scope can be your long-term solution for choosing the best NV scope.

For you to have a complete picture of all the devices that the market offers, we will bring to your attention a combined device from one of the best NV manufacturers. The proposed device combines the capabilities of a gun sight and a conventional monocular.

ATN NVM14 is lightweight, compact, and ergonomic. It has sufficient tensile strength to withstand gun recoil up to .308 caliber as a fourth-generation device. We think this durability is a bit overrated. Still, there is no doubt that innovative tube solutions will allow you to shoot using the NVM14 as a scope, albeit within reasonable limits.

Given the combined nature of the monocular, one should not expect surprising results from it. Its range of up to 100 yards, low magnification, and a modest 40-degree field of view make it a moderate choice as a short-range rifle scope, but no more.

The price of this device is relatively high. Although it is ideal for entering the world of night optics, there will be a high price to pay. On the other hand, what could be better and more reliable than a product from a trusted manufacturer.

Let’s be honest. If we were to compose the rating of the best night vision scopes based solely on our preferences, it would consist of models from ATN and AGM. But, there are many other exciting scopes on the market.

What can the people who gave us Chernobyl and communism offer us? For example, this Russian monster WPA PN22K. For example, a device with Gen 3 and Gen 2+ tubes, with night and day modes and good recoil resistance.

It gives good picture quality and a range of up to 350 yards in the Gen 2 Plus package. Plus, this scope is heavy, so if it breaks, you can throw it at the animal.

This is an expensive but great device. Without a doubt, it will not disappoint you. What is the technology that allows, under certain conditions, to identify targets at a distance of up to 1000 yards?

It’s safe to say that the Knights Armament AN / PVS-30 justifies its $ 10,000 price tag. In addition to absolutely fantastic range performance, it offers you an incredible 120mm lens, replaceable batteries, maximum water resistance, and an anti-fog system. Separately, we note the system that absorbs the recoil of the weapon. In general, this device will fully pay for the money spent on it.

Proper, many options will open to you when purchasing additional accessories for Digisight N455. Everything seems to be provided in this device from a well-known manufacturer. That’s bad news for such an expensive scope, but that’s the case. We will tell you about another costly and decent option at the end of our short review.

On the other hand, it is intuitive and straightforward to use, supports all the latest digital advances, and functions both day and night. Also, do not forget that the proposed functionality is unlikely to be useful for beginners. Still, the Pulsar Digisight N455 is intended for professionals who use serious guns, as it has an excellent recoil suppression system. In addition, it supports both internal and external power supplies and is perfect for video surveillance applications.

Choosing is always a daunting challenge, especially if you are looking for the perfect night vision scope. But if you spend enough time and effort, you will get emotions incomparable with anything. And we will try to make this task easier for you.